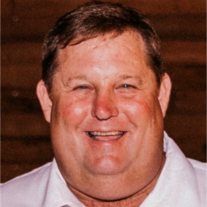 A Celebration of Life memorial service for Chris Jones, 52 of Corinth, MS, will be Sunday, February 23, 2020 at 3:00 PM at Magnolia Funeral Home Chapel of Memories. Bro. Dustin Talley will officiate the service. Visitation will be Sunday, February 23, 2020 from 1:00 PM until service time at Magnolia Funeral Home. Mr. Jones passed away Tuesday, February 18, 2020 at Magnolia Regional Health Center. He was born March 11, 1967 in Corinth, MS to James Buford Jones and Edith Gray Andrews Jones. He was a maintenance supervisor for Morgan Van Lines and was of the Baptist faith. He was an outdoorsman who loved being with his family, especially riding the ATV with his grandchildren. He enjoyed working on and driving fast cars and motorcycles. He was always carrying on and making jokes that made people laugh, even when he was at his weakest. Chris is survived by his son, Andrew Jones (Lacie) of Olive Branch, MS; his daughter, Brittany Sesma (Jacob) of Corinth, MS; 6 grandchildren, Dani Kate Sesma, Ramsey Jones, Decker Sesma, Cage Richardson, Mason Hodum and Tyler Lambert; his mother, Edith Andrews Jones of Corinth, MS; his sister, Sherry Jones of Corinth, MS; his significant other, Sybil Busbin of Corinth, MS; his step-daughter, Elizabeth Fretz of Caledonia, MS; other relatives and a host of friends. He was preceded in death by his grandson, Jaxon Sesma and his father, James Buford Jones. Magnolia Funeral Home has been honored to serve the family of Mr. Chris Jones.
To order memorial trees or send flowers to the family in memory of Chris Jones, please visit our flower store.
Send a Sympathy Card