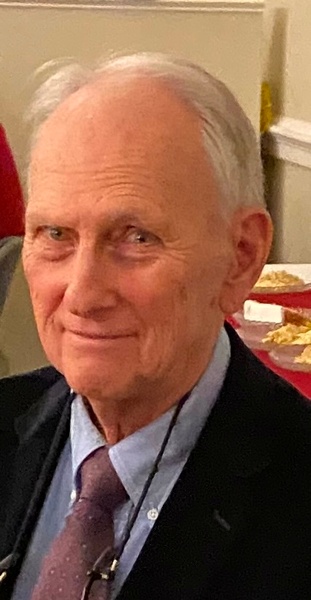 David Gordon Stewart, 84 of Corinth, MS, passed peacefully at his home on July 2, 2022.  A Celebration of Life service will be Thursday, July 7, 2022 at 12:00 P M at First Presbyterian Church Fellowship Hall.  Dr. Don Elliott and Rev. Waring Porter will officiate the service.  Interment will be at Hamilton Memorial Gardens in Hixon, TN.  Visitation will be Thursday, July 7, 2022 from 11:00 until service time at First Presbyterian Church Fellowship Hall.  Mr. Stewart served in the United States Navy, a leader in the Boy Scouts of America Explorers Troop, member of the Jaycees, as well as other civic organizations throughout his lifetime. He was a career Industrial Engineer with ties to ITT in Corinth for 18 years. He had additional passions with music at the top of his list.  David made many lifelong friends throughout the United States and in other countries establishing brotherhoods around the world of music.  He was prolific in guitar and piano, following many well known artists in his field of interest for decades.  He enjoyed many music sessions with his picking buddies over the years.  During his lifetime, David was also a private pilot and enjoyed flying as often as he could; he particularly liked photography, history, hunting, camping and fishing along with having fun with his children and grandchildren.  Mr. Stewart was a longtime faithful member of First Presbyterian Church in Corinth, MS in which he served as deacon and other ministries there.  David is survived by his wife, Rebecca Blair Stewart, two children; his son, Gordon Douglas Stewart and daughter in love, Tracey Allen Stewart of Tupelo, MS, and his two grandsons, Benjamin Gordon Stewart and Elijah Gordon Stewart; his daughter, Dr. Molly Anna Stewart now of Eugene, OR, as well as many other family and friends throughout the country.  He was preceded in death by his father, States Gordon Stewart and his mother, Edith Shankles Stewart.  In lieu of flowers the family request donations be made to Oasis, American Heart Association, Parkinson Foundation, or the Corinth Alcorn County Humane Society.  Magnolia Funeral Home has been honored to serve the family of Mr. David Gordon Stewart.

To order memorial trees or send flowers to the family in memory of David Gordon Stewart, please visit our flower store.