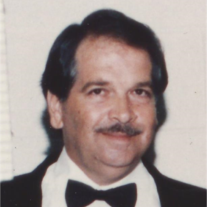 A Celebration of Life service for Gene "Jackie" Pence, 79 of Red Banks, MS, will be Friday, February 14, 2020 at 1:00 PM at Carey Chapel Baptist Church in Red Banks, MS with interment to follow in the church cemetery. Bro. Barry Littlefield will officiate the service. Visitation will be Friday, February 14, 2020 from 11:00 AM until service time at Carey Chapel Baptist Church. Mr. Pence passed away Wednesday, February 12, 2020 at his residence. He was born February 24, 1940 in Etta, MS to James O. Pence and Maudie E. Hearn Pence. He retired from Kimberly Clark as a mechanic after 20 years of service. He was of the Baptist faith and was a member of Carey Chapel Baptist Church. Jackie is survived by his wife of 38 years, Denise L. Pence of Red Banks, MS; his son Barry Lee; his daughters: Donna Jean Ramming (Jerry), Tracy Jo Fitch and Pam Dixon; 11 grandchildren; 9 great-grandchildren; other relatives and a host of friends. He was preceded in death by his daughter, Kimberly Jane Wright; his father, James Otry Pence; his mother Maudie Ellen Hearn Pence and his brother, James Morris Pence. Pallbearers will be James Smith, Jon Miller, Mike Faust, Derick Williams, David Martin and Blair Godsey. Honorary pallbearer will be Boe McClure. Magnolia Funeral Home has been honored to serve the family of Mr. Gene "Jackie" Pence.
To order memorial trees or send flowers to the family in memory of Gene "Jackie" Pence, please visit our flower store.
Send a Sympathy Card