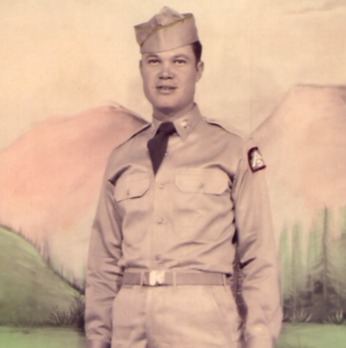 William Russell Browder, aged 94, of Byhalia, Mississippi, and husband of the late Earline Dill Browder, died Friday morning, July 29th, 2022, at Baptist Memorial Hospital in Oxford, Mississippi. He was born to the late Edward and Lucinda Browder, on October 21st, 1927. Always quick to share a story, he was a proud veteran and served in the United States Army. He was a faithful member of Macon Road Baptist Church until his later years when he moved to be under the care of his son Steve and his wife Jackie. Known for his famous cracklin cornbread and drinking cold coffee - He loved his cats, turnip greens, and hearing about his son's hunting trips. He is survived by his five children, Tommy Browder (Linda) of Granger, IA, Steve Browder (Jackie) of Byhalia, MS, David Browder (Phyllis) of Arlington, TN, Louise Storey of Lakeland, TN, and Barry Browder of Memphis, TN; four grandchildren and six great-grandchildren. In addition to his wife and parents, he was preceded in death by his three sisters, Catherine, Lorraine, Artie May, and his brother, Royal. Services will be officiated by Rev. David Haynes on Monday, August 1st, at 2 pm Magnolia Funeral Home - East in Corinth, Mississippi with visitation beginning at 1 pm. Eulogies will be offered by Stephanie Atkison and Louise Storey. Following the services, the family will process to White Sulphur Cemetery in Pickwick, Tennessee for graveside services with military honors. Those honored to serve as pallbearers include Tommy Browder, Steve Browder, David Browder, Barry Browder, Danny Haynes, and Blake Atkison. Magnolia Funeral Home is honored to care for the family of William Russell Browder.

To order memorial trees or send flowers to the family in memory of William Russell Browder, please visit our flower store.
Send a Sympathy Card